It has been a really, really long time.
I gave up here, stopped spending so much time on the computer (major plus), then eventually wanted to get back into blogging, started a new blog, gave up on that, and then over coffee this morning I browsed back through these old posts. I realized what a nice space I'd created here, a place of simple honesty and shared moments. And I wanted to come back.

So here I am. It's a Saturday morning and I've been up since 7:20, made and ate pancakes with the kids, washed dishes and made coffee, and now the kids are jumping on Scott on the couch. They miss him so much over the week, when he's gone all day with work and school. And on the weekends they can't stay off of him. I know how they feel.

There's a lot going on in my life, and I hope to come back later today or tomorrow and give a full account, and reach out to my old friends I've abandoned. I'm sorry, friends, it's been a hard and crazy three quarters of a year, and I miss you all dearly. As the weather turns to fall, I'm coming back to writing, back to reflecting, needing to reel myself in and find the quiet space within.
Posted by Jess at 9:35 AM 1 comment:

A long, long break! How are you? I'm well, full to the brim with ideas and goals. However I don't feel full in an excited, anxious way, but in a subtle, swelling, quiet way. I just feel that this year will be wonderful, and I'm greatly anticipating the new year, and my birthday, also in January.
Some books and people have directly influenced me as of late, leading me to turn inward more, and to explore what is important to me. I find that I enjoy quiet evenings in my living room, away from the computer screen and my phone, doing something like reading and sipping tea, or in the kitchen, baking. I have pulled out my violin again, wanting to learn some fiddle tunes with which to accompany Scott on the banjo. The creative urge has been so strong! Between writing, music, and baking, I'm feeling pretty satisfied lately.

So to you, happy holidays and an especially happy new year.
What do you foresee for the new year in your life?
Posted by Jess at 1:38 PM 1 comment:

in my mind's eye

I took such a long break from writing, not only here and but also from my book, that I became disenchanted with the whole thing. I thought I was doing great, beginning to work on plot. I found a few tools online for developing plot, and tried to work it out. It sapped the energy right out of my writing, though. I felt like I'd already written the whole thing, and it died right there on my doorstep. So I took a longer break, not being able to write something that was essentially roadkill.

I read "On Writing" by Stephen King. I can't speak highly enough of this book. I loved the look into his life as a writer, the first half is a memoir which focuses on his writing, beginning in childhood. The second half was his advice on writing. He talked about creating a toolbox with which to work from, including vocabulary, grammar, and style. He offered great tips such as "write with the door closed," literally and figuratively. This really resonates with me, as does this quote I read yesterday over on Amber's blog: "Write your first draft with your heart.  Rewrite with your head," from Finding Forrester.

King also describes his writing as character-driven, beginning with a situation. This made me emphatically nod "yes" and feel reassured that I am not doomed as a writer if I just can't get behind plot-driven writing. To be honest, I can't get behind it. I love characters, first and foremost, and I don't like to figure out the plot beforehand. I have a "situation" in mind, so to speak. My novel begins with something that sets the rest of the story going, but where it goes, I don't yet know. And I like it that way.

I have been taking King's advice to heart. I sit down every day, same time, to write my 1000 words. I sit down and hope the muse shows up, and usually he does. If not, then I write boring stuff. But it's okay, I can always take out the boring stuff later. This way, without a plot drawn out, I am surprised with my characters. They show me what they are doing, and I jot it down. I am beginning to see them in my mind's eye. I catch glimpses of clothing, I hear the emotion in their voices. It's really quite exciting. And so I plod along, 1000 words at a time, in the back seat, taking notes, as I watch my characters go about their lives.

In my life, I strive to be in the moment, and to soak up the details around me, as they work like mental compost to eventually enrich my writing. Also, as cooler weather sets in, I start needing to bake. Thus the cookies begin to be a staple on my counter top. Soon it will be pies, and apple cake. What's your favorite fall treat?
Another question, I may have asked before, but I want to know again. Do you have a book on writing (or your creative outlet of choice) that really speaks to you?
Posted by Jess at 2:52 PM 5 comments:

"Writing practice knows this, knows we are not our thoughts, but lets the thoughts, visions, emotions run through us and puts them on the page. Writing is the crack through which you can crawl into a bigger world, into your wild mind." -Natalie Goldberg

Ah, the dry spell has been broken. It's always Natalie Goldberg, digging into the heart of writing, and inspiring me to get pen to page. I started reading "Wild Mind: Living the Writer's Life", and along with some encouragement from my dear friend Jessie, I sat down last night and did some writing. The thing with writing is, as Natalie Goldberg says, a writer can't stop writing. She might take a few months off, but not writing is like suicide. It will drive the writer into depression or drinking, or sometimes both. A writer just has to write.

I love Natalie Goldberg's method of creating a writing practice. It's not journaling, but just filling pages. Sometimes I do timed ten minute jaunts, sometimes I think of a subject and fill a few pages - ignoring margins and lines - until it wraps up on its own. Writing practice is a bit different than sitting down to write a novel, but writing practice is a great warm up for working on a novel. The novel I've been working on is taking some time off from me, it seems, but ideas for it keep rolling in, much to my delight. I think I've got to do some plot mapping, which I have no idea how to approach, but I feel I need to get myself organized before I continue.

For now, I'll be enjoying the drop in the temperature by going on long walks with my kids, picking up treasures all the way home. Magnolia pine cones, rocks, pecan shells, and red mottled leaves seem to be most popular these days.My personal treasures include reading late at night, my writing practice, and chilly mornings with black coffee, looking through the condensation covered windows, watching my little ones play together.
What sorts of treasures are you enjoying these days?
Posted by Jess at 4:17 PM 7 comments: 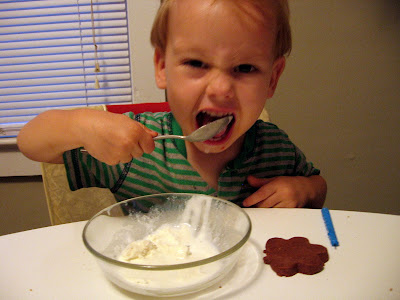 Finn turned 3 yesterday, complete with playing with friends all day, homemade pizza for dinner, and cookies and ice cream. It is a wonder that this little being whom I birthed not too long ago, is definitely on his way to becoming his own big person. He is independent and kind, and loves to read books and go on adventures. Here are a few shots from yesterday. 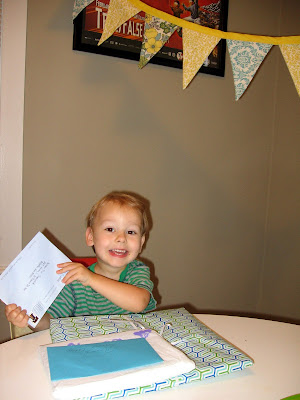 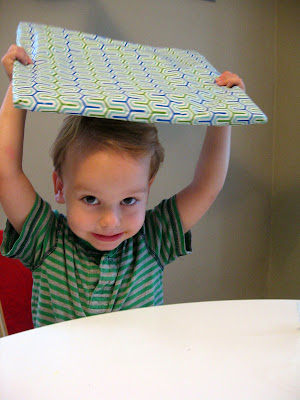 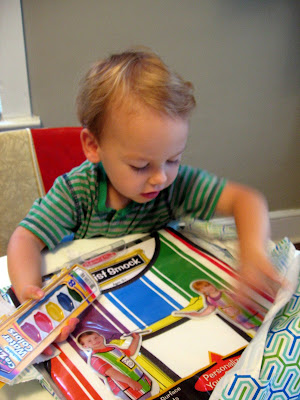 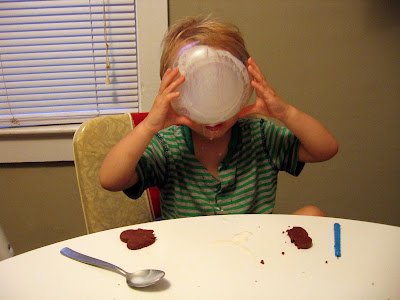 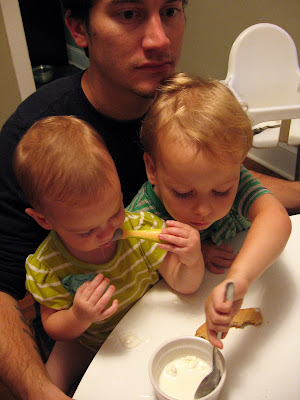 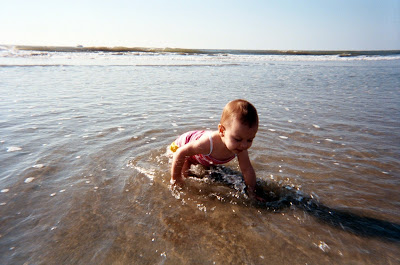 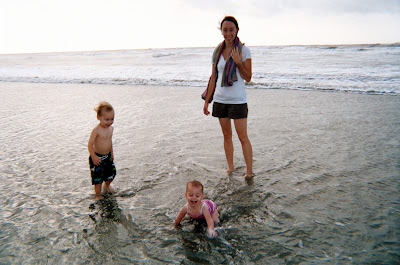 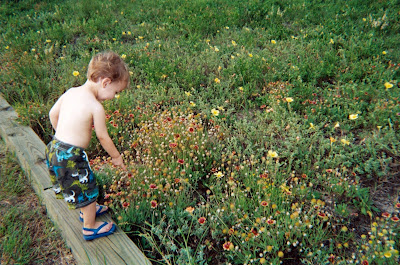 A break, a vacation, is just what a person needs sometimes.
I took a vacation when my mom and brother flew in, and we went, with the kids, to the beach together. It was wonderful! I also took a break from any sort of writing, which felt good at first, but now I feel malnourished.
The break gave my story time to breathe and come to life, and new ideas began to occur to me, guiding me along even when I felt uncertain. Now I am ready to keep writing, armed with a resolution and some major character development ideas.
Also, coming home to this house, I realized I've got some work to do to make it truly feel like home. Some cleaning, some painting, some sprucing up. Now that the weather is cooling down, I may feel more like spending time inside the house and making it more beautiful. After all, our lease is for 2 years, so I want to do a little work to make it enjoyable to live here.
The most exciting news of this week is Finn's third birthday, coming right up on Thursday. He has requested a strawberry cake, so I am on the hunt for the perfect recipe.

Are you taking a little break from anything?
Do you have any exciting news this week?
Posted by Jess at 2:14 PM 5 comments: 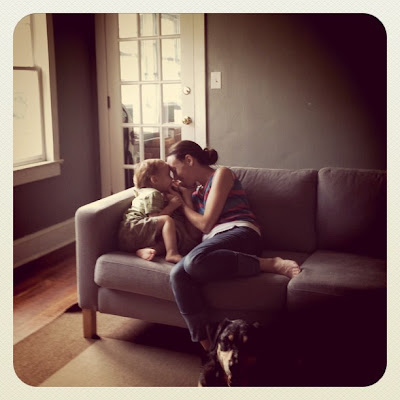 The summer days are slipping by. This morning the air was cooler, and a breeze flipped the leaves of the trees back and forth, waving hello.

I have been busy learning a new city. Atlanta is not completely new to me, I spent twelve years of my life living just outside of Atlanta, in various suburbs. Living in the city, though, is different. It is still easy for me to get turned around as I try to find my way about town. Did I already express how much I love it here? We live two blocks away from a beautiful shaded playground, a library, a post office, a cafe, a bakery, and a pizza place. Not to mention, just a mere mile from my best friend.

Here is the big news as of late.
1. Evelyn is walking! For a couple months she would take a step or two, then plop back down. Now, it is almost full-time walking, with tiny bouts of crawling in between. Watch out, world.
2. I am writing a lot. I'm practicing in my journal, Natalie Goldberg style. I have also begun writing what I can only hope will turn into a novel someday. My word count is just over 10,000 as of today. 10k! I would not have imagined that possible a few weeks ago.